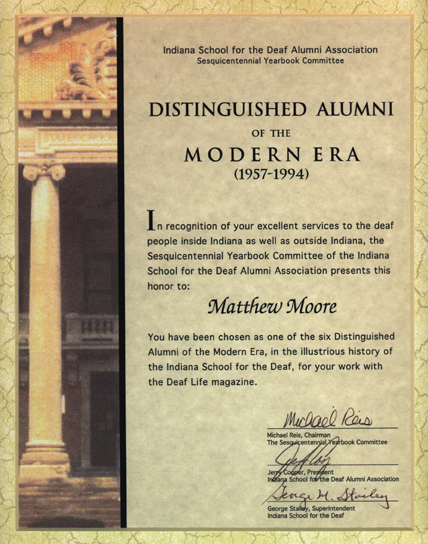 1983: Student Communication Center Certificate of Appreciation (“for outstanding and dedicated service to the SCC, 1981-1983”). PLAQUE

1983: Dedication in NTIDLife Yearbook “for the support he gave NTIDLife and the NTID community and its life.” YEARBOOK IMAGES

1989: Certificate of Recognition, World Recreation Association of the Deaf (for “outstanding assistance to WRAD,” October 1989 issue of DEAF LIFE). CERTIFICATE

1990: Resolution of 104th Annual Convention of Pennsylvania Society for the Advancement of the Deaf (“congratulations and praise” for editorial leadership and excellence of DEAF LIFE). CERTIFICATE

1993: President’s Award, Lilac Chapter of American Sign Language Teachers Association (May 1993), “for his outstanding contribution and service to the organization,” by raising $6,000 at the ?Signs ‘R’ Us? conference. PROGRAM COVER & PLAQUE

1993: NTID Alumni Association’s first Outstanding Alumni Award (given at NTID’s 25th Anniversary Alumni Reunion, July 1993), “for valuable service on behalf of deaf citizens and for contributing to the betterment of the Deaf community and to NTID/RIT”). PLAQUE, PHOTO, & MEMENTOS

1993: Texas Deaf Caucus Award (October 1993), for helping to raise needed funds (approximately $8,000) through sales of For Hearing People Only. PLAQUE

1997: Star Plaque, Rainbow Alliance of the Deaf, a token of thanks for Moore’s assistance with the 15th Biennial Conference, July 6. PLAQUE

Certificate of Appreciation from WRAD, “in appreciation of service for continued support of WRAD,” December 3. LETTER & CERTIFICATE

1998: Plaque of recognition from the Austin Deaf Caucus for Moore’s “decade of service to the Deaf Community with DEAF LIFEmagazine/press/multimedia,” December 15. PLAQUE

2022: Conference of Educational Administrators of Schools and Programs for the Deaf (CESAD)’s Edward Allen Fay Award “in appreciation of your dedication to literacy and media. Your contribution to deaf education and our community are significant and appreciated.”